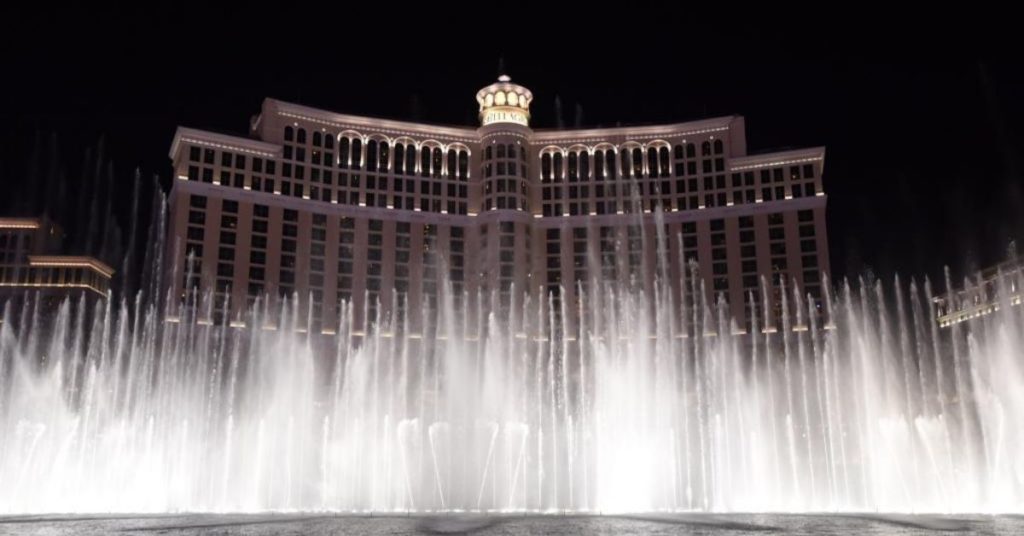 10 Secrets of Bellagio and Its Famous Fountains

Everybody has a story in Las Vegas even if they’re only remembered in blurry fragments. Be it about that one crazy weekend, celebrity sighting or glimpse at casino lore, one thing is certain: The stories become part of every person who visits or resides here. And it’s that sense of ownership that keeps people coming back and keeps the mystique alive and what ultimately ensures that Las Vegas is one of the most well-known cities in the world.

To truly become an authority of this constantly reinventing, fast-paced whirlwind of a tourist destination, you better pick up a hidden gem or two to regale your friends. Alas, 10 Secrets is born. We will do our best to flesh out the unknown treats, stir up the insider tips and give a local’s eye view of some of the little-known treasures that can be found on and off the Las Vegas Strip.

This Las Vegas icon needs no introduction. Bellagio Las Vegas has a reputation all its own. But do we really know everything about the swanky resort? We dug deep and found a few tidbits that will help elevate your intimate Las Vegas knowledge to the next level.

• Twenty-eight songs (and their choreographed shows) are rotated throughout the year. Additionally, eight holiday-themed shows join the program between Thanksgiving and the New Year.

• It takes six months to develop a new show.

• It’s the work of 1,200 water-emitting devices. Some create a movable stream up to 77 feet high, while extreme shooters can fire water up to 460 feet.

• Lake Bellagio (also referred to as Lake Como) is comprised of more than 8.5 acres of water spanning more than 1,000 feet.

1. The Path to Bellagio Was Paved in Fanfare

Before Bellagio took shape, another storied hotel stood on the very same grounds—The Dunes. When it was time for The Dunes’ south tower to come down, a new era was ushered in with true Las Vegas fanfare. Rather than a typical implosion, the blast was “triggered” theatrically by one of the cannons in Treasure Island’s now-defunct pirate show.

Think Like a Local: In an archived article in The Las Vegas Review-Journal, it was reported that Bellagio construction workers stumbled onto four bags of Dunes casino chips buried at the site.

Having a signature cocktail may be the mark of good party, but when it’s as delicious as the Bellagio cocktail, it becomes the official flavor of the resort. The drink, comprised of Fruit Purée, Alizé Red Liqueur and Sparkling Wine, can—and should—be ordered almost anywhere on the property. Many of Bellagio’s restaurants have their own signature drinks, as well.

Think Like a Local: If you tip well and act right, you may even get offered a tasty snack with your beverage, gratis. And like everything else at Bellagio, it’s upscale AF.

3. Enjoy the View From the Parking Lot

Alright, this may be an obvious one because every local knows that parking garages often offer some of the best views of the skyline. Bellagio’s self-parking garage is a personal favorite, not only because it’s easy to access, but also because of the unobstructed panorama it provides of The Fountains, Paris Las Vegas and more.

Think Like a Local: Always park on the top floor of Strip garages (when weather permits). Not only will you get the unexpected views, you’ll also never forget where you left your car.

Bellagio loyalists probably remember the stunning staircase that used to reside in Bellagio’s famed conservatory. However, its removal hardly caused a blip on our radars. It could be because the staircase, although grand, seemed virtually unused. Or because its replacement, a quartz quarry obelisk, looks like it belongs there.

5. The Quiet Birth of Legends Room

Speaking of changes, the resort’s high-stakes poker room underwent a major—albeit subtle—reinvention. As possibly one of the most well-known card halls, Bellagio’s poker room plays host to some big games, including The World Series of Poker.

The attached, two-table, high-stakes area was originally named “Bobby’s Room” as a tribute to avid poker player and former MGM Chief Customer Development Officer Bobby Baldwin. Things got sticky after he resigned from his position and took a job at the forever forthcoming property The Drew. And without flourish, the plaque was rehung, renaming the space Legends Room.

This one may not be a secret. In fact, Bellagio’s renowned Conservatory is one of the resort’s main attractions. The gorgeous 14,000-square-foot, glass-ceilinged botanical garden showcases a sensory-captivating seasonal display that changes four times a year. What’s less well-known is what it takes to bring this floral extravaganza to life. Working around the clock six days a week, 125 staff members keep this vibrant display healthy and thriving year-round.

Think Like a Local: The display is refreshed for the holidays in November, in January for Lunar New Year, in early spring (March) and in the summer (late May). To avoid the crowds, explore the garden in the morning midweek. The attraction is dark for the week prior to opening each new display, so plan accordingly.

7. Chat With the Horticulturists

Do you wish your garden was a fraction as healthy and beautiful as the Conservatory? Each day, from 10:30-11:30 a.m., Bellagio horticulturists designated “Mr. and Mrs. Green Thumb” offer gardening tips and additional information to guests visiting the exhibit.

The millions of fresh blooms aren’t the only lifeform that calls the Conservatory home. Two generations of koi were spawned in the garden. Although not a continuous fixture of the display, the brightly colored and cherished fish are often featured during the Lunar New Year show and are always a highlight.

Think Like a Local: Don’t feed the fish. Seriously, does it really need to be said?

There’s no uninspiring “hotel art” inside Bellagio. Around every turn, you’ll find original artwork from famed masters and lesser-known artisans, sometimes side-by-side. Of course, you can check out the Gallery of Fine Art to see a curated exhibition, but don’t let your journey stop there. A pop into Michelin-star restaurant Picasso will not only reward you with an unforgettable meal, but you can also feast your eyes on 22 original Picasso paintings and other prominent masterpieces.

10. The Fountains of Bellagio

Possibly one of the most beloved and well-known attractions in Las Vegas, The Fountains of Bellagio have taken center stage in many films, shows and events, as well as making an appearance in pretty much any Las Vegas-related B-roll footage taken in modern times. The synchronized and mesmerizing water shows are a must witness for visitors and locals alike, and a lot of effort goes into ensuring that each of the 10,000 annual shows go off without a hitch.

All the news, good chews and great views on the Las Vegas Strip

Order Your Favorites From Screen to Plate

Where to Get Drenched After Dark

5 Reasons We’re Hyped About the New...